.
A blond started from her house for air port in a taxi. Suddenly the driver stopped the taxi in between and said - " Madam now we can't go ahead .. because the petrol tank is drained.

.
Teacher - (to tommy) What is skeleton?

Tommy - Sir skeleton is a man who starts diating but unfortunately forgets to stop it.
.

Posted by Sunil Doiphode at 9:53 AM 0 comments

.
There once was a blind man who decided to visit Texas. When he arrived on the plane, he felt the seats and said, "Wow, these seats are big!" The person next to him answered, "Everything is big in Texas."

When he finally arrived in Texas, he decided to visit a bar. Upon arriving in the bar, he ordered a beer and got a mug placed between his hands. He exclaimed, "Wow these mugs are big!" The bartender replied, "Everything is big in Texas."

After a couple of beers, the blind man asked the bartender where the bathroom was located. The bartender replied, "Second door to the right." The blind man headed for the bathroom, but accidentally tripped over and skipped the second door. Instead, he entered the third door, which lead to the swimming pool and fell into the pool by accident.

Posted by Sunil Doiphode at 9:38 AM 0 comments

.
A man in a bar sees a friend at a table, drinking by himself.

Approaching the friend he comments, "You look terrible. What's the problem?"

"Then this month," continued, the friend, "absolutely nothing!"
.

Posted by Sunil Doiphode at 9:47 AM 0 comments 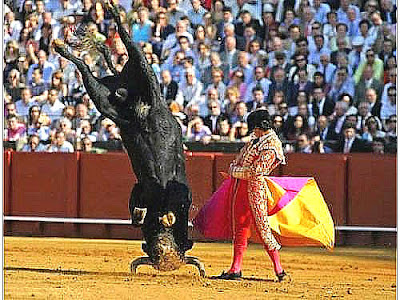 .
If money doesn't grow on trees then why do banks have branches?

.
A maid servant hurriedly went to sushila, " Mam, three women from our neightbourhood are beating your mother in law badly"

Sushila went downstairs with her maid servent and cooly looked at the scene. Maid servent asked her with amusement, " Why don't you help?"

Banta : My god, none of them hit you?

Posted by Sunil Doiphode at 9:19 AM 0 comments

Once a blond received a miss call. She phoned on that number saying, '' My dear friend... Do you know... the battery of your mobile is drained. "

Once a blond received a blank mail. She phoned on that number saying, '' My dear friend... Do you know... the ink of your mobile is dried. "

Posted by Sunil Doiphode at 10:32 AM 0 comments

I can resist everything except temptation."

Posted by Sunil Doiphode at 9:28 AM 0 comments