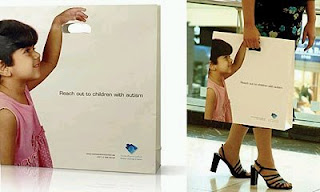 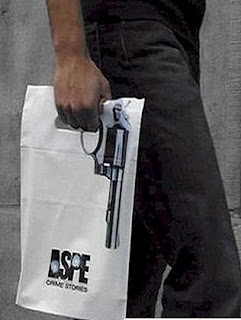 Posted by Sunil Doiphode at 9:02 AM 0 comments 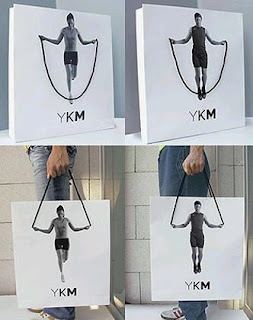 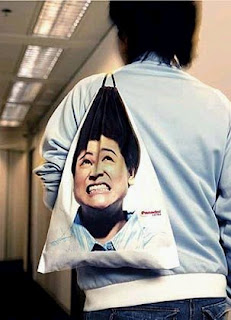 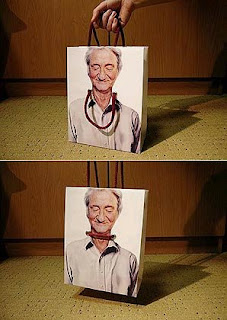 Posted by Sunil Doiphode at 9:33 AM 0 comments

.
An applicant was filling out a job application. When he came to the question, "Have you ever been arrested?" He answered, "No."


The next question, intended for people who had answered in the affirmative to the last one, was "Why?" The applicant answered it anyway: "Never got caught."
.

Posted by Sunil Doiphode at 9:02 AM 0 comments

.
Employer to applicant: "In this job we need someone who is responsible."

Applicant: "I'm the one you want. On my last job, every time anything went wrong, they said I was responsible."
.

.
A man walks into a drug store and asks the pharmacist, "Do you have any acetylsalicylic acid?"


"You mean aspirin?" asked the pharmacist.

Posted by Sunil Doiphode at 9:08 AM 0 comments

.
Patient to optometrist: I’m very worried about the outcome of this operation, doctor. What are the chances?

Optometrist to patient: Don’t worry, you won’t be able to see the difference.
.

.
A good samaritan was walking home late one night when he came upon this drunk on the sidewalk. Wanting to help, he asked the drunk "do you live here?" "Yep". "Would you like me to help you upstairs?" "Yep". When they got up on the second floor, the good person asked "Is this your floor?" "Yep".


Then the good samaritan got to thinking that maybe he didn't want to face the man's irate and tired wife because she may think he was the one who got the man drunk. So, he opened the first door he came to and shoved him through it then went back downstairs. However, when he went back outside, there was another drunk. So he asked that drunk "Do you live here?" "Yep". "Would you like me to help you upstairs?" "Yep". So he did and put him in the same door with the first drunk. Then went back downstairs.


Where, to his surprise, there was another drunk. So he started over to him. But before he got to him, the drunk staggered over to a policeman and cried "Please officer, protect me from this man.


He's been doing nothing all night long but taking me upstairs and throwing me down the elevator shaft!"
.

Posted by Sunil Doiphode at 9:00 AM 0 comments

.
A local business was looking for office help. They put a sign in the window, stating the following: "HELP WANTED. Must be able to type, must be good with a computer and must be bilingual. We are an Equal Opportunity Employer."

A short time afterwards, a dog trotted up to the window, saw the sign and went inside. He looked at the receptionist and wagged his tail, then walked over to the sign, looked at it and whined.

The manager said "I can't hire you. The sign says you have to be able to type." The dog jumped down, went to the typewriter and proceeded to type out a perfect letter. He took out the page and trotted over to the manager and gave it to him, then jumped back on the chair.

The manager was stunned, but then told the dog "the sign says you have to be good with a computer." The dog jumped down again and went to the computer. The dog proceeded to enter and execute a perfect program, that worked flawlessly the first time.

By this time the manager was totally dumb-founded! He looked at the dog and said "I realize that you are a very intelligent dog and have some interesting abilities. However, I *still* can't give you the job."

The dog jumped down and went to a copy of the sign and put his paw on the sentences that told about being an Equal Opportunity Employer. The manager said "yes, but the sign *also* says that you have to be bilingual."

The dog looked at the manager calmly and said, "Meow!"
.

Posted by Sunil Doiphode at 9:09 AM 0 comments

.
Two blondes were recently observed in a parking lot trying to unlock the door of their Mercedes with a coat hanger. Here is their dialogue:

Blonde One: I can't seem to get this door unlocked!

Blonde Two: Well, you'd better hurry up and try harder! it's starting to rain, and the top is down!
.

Walk on a water - Funy photo

.
Ok, so everyone knows about the first two dudes to walk on water… Jesus and his apostle, Peter. Well there’s one more, and it happened recently and one of those running of the bulls events. 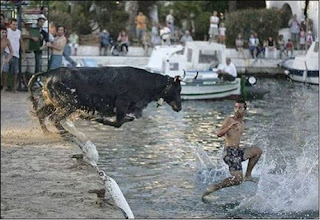 In case you’re from Guinness, I think his name was Jose from some place in Pamplona. In other news, we’ve been anxiously looking foward to PETA’s new “Running of the Nudes” event. Photographers are standing by.
.

Posted by Sunil Doiphode at 9:56 AM 0 comments 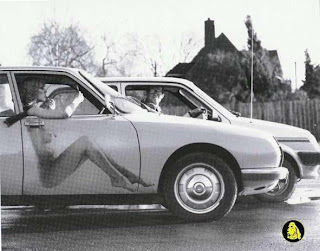 Posted by Sunil Doiphode at 8:51 AM 0 comments 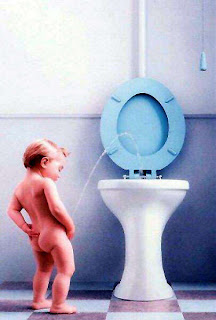 Posted by Sunil Doiphode at 9:16 AM 1 comments 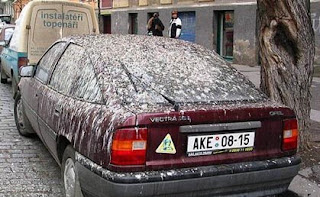 Posted by Sunil Doiphode at 9:14 AM 0 comments

.
What's the difference between chopped beef and pea soup?
Everyone can chop beef, but not everyone can pea soup!
.

Posted by Sunil Doiphode at 9:41 AM 0 comments

.
A crazy person was writting a letter.

Doctor asked him, " To Whom you are writting a letter''

Posted by Sunil Doiphode at 10:58 AM 0 comments

.
A man comes into a pub, sits down at the bar and orders a beer. The bar keeper brings him his beer. After he has drunk it, he grabs in his bag and puts a small piano on the bar, grabs in his bag and puts a small chair on the bar and grabs a third time in his bag and sits down a small man on that chair.
And the small man plays piano very well, a the most beatyful music they've ever heared. After he's finished, everyone applauds. And the bar keeper asks the man: "Where do you have it from? It's so wonderful."

And the man said: "I own an dgini-lamp. And so I got this by a wish of mine. Hey," he said to the bar keeper, "do you have a wish? You can wish you everything!"

>
"Me?", the bar keeper asks. "I have a wish for free? Coo-ool." Ok, no sooner said than done, the man grabs in his bag and gets out from it the meant lamp. He rubs at the side of the lamp and the dgini appeares: "Ok, budy. You have one wish for free." And the bar keeper says: "I wanna have one million dollars!" The dgini snap one's fingers and disapperes, and all over the bottom are dugs. Small, yellow cackling dugs. And the bar keeper said to the man: "But I wanna have dollars, not dugs." And the man: "Do you really think, I've asked for a 12 inches pianist?"
.

Posted by Sunil Doiphode at 9:13 AM 0 comments

English Joks - Across a river

Posted by Sunil Doiphode at 8:52 AM 0 comments

English joks - In the heaven

.
Three men were standing in line to get into heaven one day. Apparently it had been a pretty busy day, though, so St. Peter had to tell the first one, "Heaven's getting pretty close to full today, and I've been asked to admit only people who have had particularly horrible deaths. So what's your story?"


The first man replies: "Well, for a while I've suspected my wife has been cheating on me, so today I came home early to try to catch her red-handed. As I came into my 25th floor apartment, I could tell something was wrong, but all my searching around didn't reveal where this other guy could have been hiding. Finally, I went out to the balcony, and sure enough, there was this man hanging off the railing, 25 floors above ground! By now I was really mad, so I started beating on him and kicking him, but wouldn't you know it, he wouldn't fall off. So finally I went back into my apartment and got a hammer and starting hammering on his fingers. Of course, he couldn't stand that for long, so he let go and fell-but even after 25 stories, he fell into the bushes, stunned but okay. I couldn't stand it anymore, so I ran into the kitchen, grabbed the fridge, and threw it over the edge where it landed on him, killing him instantly. But all the stress and anger got to me, and I had a heart attack and died there on the balchoy."


"That sounds like a pretty bad day to me," said Peter, and let the man in.


The second man comes up and Peter explains to him about heaven being full, and again asks for his story.


"It's been a very strange day. You see, I live on the 26th floor of my apartment building, and every morning I do my exercises out on my balcony. Well, this morning I must have slipped or something, because I fell over the edge. But I got lucky, and caught the railing of the balcony on the floor below me. I knew I couldn't hang on for very long, when suddenly this man burst out onto the balcony. I thought for sure I was saved, when he started beating on me and kicking me. I held on the best I could until he ran into the apartment and grabbed a hammer and started pounding on my hands. Finally I just let go, but again I got lucky and fell into the bushes below, stunned but all right. Just when I was thinking I was going to be okay, this refrigerator comes falling out of the sky and crushes me instantly, and now I'm here."
.

Posted by Sunil Doiphode at 10:28 AM 0 comments

Difference between Michael Jackson and Santa

What's the difference between Michael Jackson and Santa?
Nothing, they both leave children's bedrooms with empty sacks!
.

Posted by Sunil Doiphode at 9:27 AM 0 comments

.
The town fathers were looking for a way to increase attendance and participation at their regular meetings. One member suggested bringing in a hypnotist. The officials agreed, a famous hypnotist was hired, publicity distributed, and everyone was pleased.


The crowd became mesmerized as the watch swayed back and forth, light gleaming off its polished surface. Hundreds of pairs of eyes followed the swaying watch, until suddenly the hypnotist's fingers slipped and the watch fell to the floor...


It took three weeks to clean up the town hall.
.

Posted by Sunil Doiphode at 10:37 AM 0 comments