what are you doing? 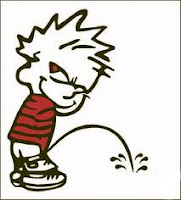 Late one night, little Johnny woke up to the some loud noises
coming from his parents' bedroom. He got out of bed and walked
down the hall towards his parents room. Before he made it to
the end of the hall, the noises had ceased and the bathroom
light had gone on. Little Johnny walked into the bathroom and
saw his father removing a used condom.
"Daddy, what are you doing?" asked little Johnny.
His father looked around nervously wondering what he could tell
his son.
I, um, I'm just checking out the bathroom for mice."
replied his father.
Johnny looked at his father with a gaze of confusion and said,
"Well, what are you doing? .... Fucking them?"
.

Posted by Sunil Doiphode at 9:54 AM